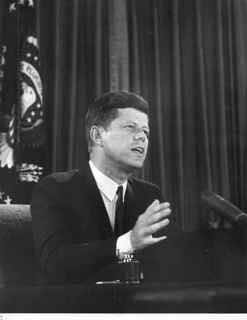 Kennedy's election symbolized optimism and youth in America, the rise of a new generation. His assasination in Dallas seemed to rob America of some of its hope and vitality.Elected 1960

John F. Kennedy was born in Brookline, Massachusetts. He grew up in comfort. Kennedy first attended the Dexter school in Brookline. In 4th-6th grade, he attended the Riverdale Country Day School, in New York. From 1931 to 1935, he attended the Choate Academy, were he was an average student. Although he graduated with a ranking of 62 out of 112, he was voted "most likely to succeed." From 1936-1940, Kennedy attended Harvard. He wrote a senior thesis that was published and earned him over $40,000. It was titled "Why England Slept," and explained the British action regarding the agreement with Germany at Munich.

During World War II, Kennedy served in the navy. He commanded a patrol boat which, while on duty in August 1943, was rammed by a Japanese destroyer. Two members of his crew were killed. He managed to swim for four hours while helping his surviving crew members. He was discovered by Island dwellers and was rescued by the Navy a few days later.

In 1946, Kennedy ran for the U.S. House of Representatives. He won handily. He earned a reputation while in the House for firmly standing up for his beliefs. In 1952 he ran for the Senate. He was able to buck the Eisenhower landslide of that year. On the one hand, he was a strong critic of Communism, and yet he was also critical of the interventionist anti-Communist policies of John Foster Dulles. He was, however, strangely uncritical of the "Witchhunts" of Joseph McCarthy. In 1956, Kennedy wrote Profiles of Courage, a biography of a group of politicians who took courageous but unpopular stands.

The inauguration of President Kennedy ushered a period of new expectations in American politics. He represented a new generation of politicians. In his inaugural address, he stated: "Ask not what your country can do for you, ask what you can do for your country." He described his policies as those of the New Frontier. He asked for legislation to speed economic growth, cut unemployment, rehabilitate depressed areas, aid education and provide additional medical care for the elderly. Congress was slow in approving the legislation that Kennedy requested, but eventually many were approved.

Kennedy fought vehemently on behalf of civil rights. During his term of office, a black man, James Meredith, enrolled at the formerly all-white University of Mississippi. He had to be protected by the National Guard. Street rioting followed. It was a time when "freedom riders" were moving throughout the South, attempting to desegregate areas under public domain. The Justice Department, under the leadership of the President's brother, Robert Kennedy, worked to uphold the civil rights of the those protesting racial discrimination in the South.

Perhaps President Kennedy's most dramatic pronouncement was his call to land a man on the moon by the end of the decade. In 1969, six years after Kennedy's murder, this goal was met.

Kennedy's foreign policy got off to a poor start. Soon after he took office, a group of 1,500 Cuban exiles, with the support of the C.I.A., invaded Cuba in the hope that they could overthrow Fidel Castro. The failed invasion had been planned during the Eisenhower Administration, but the Kennedy Administration gave its approval and accepted responsibility for the failure. In August 1961, the East Germans began building the Berlin Wall. For a time, tensions were high. Kennedy made it clear he would go to war to maintain the freedom of West Berlin.

In October of 1962, US intelligence determined that the Soviets were placing medium- range ballistic missiles in Cuba. It was feared that this would upset the balance of power in the world, and pose a threat close to US shores. President Kennedy went public with the news, demanding that the Soviets withdraw the missiles from Cuba. Simultaneously, the Navy was instructed to set up a blockade of Cuba, while the army prepared an invasion force. The Soviets backed down and agreed to remove their missiles from Cuba.

During Kennedy's Administration, the United States first directed its interest to Southeast Asia, at Laos. In July 1962, representatives of the United States and 13 other nations agreed to guarantee the neutrality of Laos. Meanwhile, Communist guerrillas were making consistent progress in taking control of neighboring South Vietnam. Kennedy dispatched increasing numbers of advisors to South Vietnam. Their numbers rose from 1,000 to 16,000 during the Kennedy administration. Kennedy never authorized the dispatching of combat troops to South Vietnam.

During a visit to Dallas in November 1963, Kennedy was assassinated by a gunman while traveling with his wife, Jacqueline, in his motorcade. Lee Harvey Oswald was arrested for the crime, but he was killed soon after, and the exact details of Kennedy's assassination remain unknown.