The Railroads and the Civil War 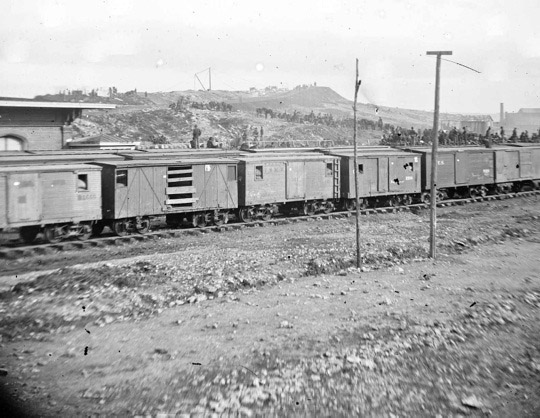 Baltimore, which was a city of divided loyalties was also a city who in 1861, rail stations were separated. Thus as soldiers arrived from the North heading to the army of the Potomac they had to cross the city. On April 19th when the Sixth Massachusetts Regiment arrived its transfer across the city was blocked by Confederate sympathizers. The troops dismounted from their train, and with guns loaded they attempted to traverse the city. After rocks felled a number of the soldiers they opened fire on the rioters killing a dozens of them.

The North began the war with an enormous advantage over the South, it possessed over twice the rail mileage, twenty thousand miles to the South's nine thousand. The North's railroads were also better equipped. The Eire and the Pennsy alone had more locomotives then the whole South.

The railroads were used both to transport troops and supplies. Lee used them extensively to bring troops between Richmond and the Shenandoah Valley.
In the battle Chattanooga, 25,000 men and ten batteries of cannon were sent by rail from Washington to reinforce the Union army by rail in eleven days

The rails soon became a prime military target, of both raiders from the South and North as well as of strategic campaigns were the goal was to capture rail centers. Raids were constantly destroying bridges and rail right of ways and rolling stock. The North had a great advantage however; they could replace their losses. While the South's one facility for making locomotives in Richmond had been converted into an armaments factory.
AS the war drew to a close the North through its extensive Military Rail roads was supplying its troops by the trainload, while the confederate army, whose rail systems was nearly completely destroyed was starving.