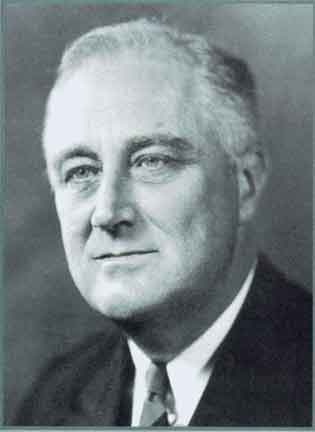 American President Franklin Delano Roosevelt was born in Hyde Park, New York. He traveled extensively with his family in the United States and in Europe. From 1900 to 1904, he was at Harvard University, where he was an average student but was editor-in-chief of the school paper, the Harvard Crimson. He attended Columbia Law School, but dropped out in 1907 after he took and passed the bar exam.

From 1911 to 1913, he was a New York State Senator and from 1913 to 1920, Roosevelt served as Assistant Secretary of the Navy. He was an early supporter of US entry into World War I. In 1920, Roosevelt was the Vice Presidential candidate on James Cox's unsuccessful ticket.

In 1921, Roosevelt was struck with polio, which paralyzed his lower extremities for the rest of his life. After he spent three years in recovery, Roosevelt began his political comeback by giving the nominating speech for Alfred E. Smith at the Democratic Convention of 1924.

In 1928, Roosevelt was elected Governor of New York. He was a progressive Governor, easing credit to hard-pressed farmers and developing programs to help the unemployed.

Franklin Roosevelt was the only President to break the two-term Presidential tradition. He was elected for four consecutive terms.

Following Roosevelt's first inauguration, there began what came to be known as "The Hundred Days," during which time Roosevelt called the Congress into a special session. In this special session, legislation was enacted to help overcome the Depression. The legislation included emergency banking laws; new regulations for the securities and insurance industries; the establishment of a civilian conservation corps to put a quarter of a million young unemployed workers to work on public projects and the Agriculture Adjustment Act that gave the federal government extraordinary powers to assist farmers. Unemployment insurance legislation was enacted for the first time, as well.

Roosevelt asked Congress to create a number of new agencies. One of them was the National Recovery Administration, whose job it was to enforce codes of conduct within industry while relaxing anti-trust laws in order to promote business growth.

The Tennessee Valley Authority, the first publicly-held utility corporation, was created with a mandate to develop power resources in the Tennessee Valley. The Federal Relief Administration designed poverty programs. The Public Works Administration created funding for infrastructure such as dams, with an eye to reviving the economy and creating jobs. The National Housing Act provided insurance for mortgages.

There were many who felt that Roosevelt was extending the power of government too far, with what became known as the New Deal. The Supreme Court ultimately found a number of the acts to be unconstitutional, including the NRA. Despite criticism, Roosevelt was reelected by the largest popular and electoral vote in US history.

Roosevelt felt that his policies of recovery were being undermined by the Supreme Court, and he thus attempted to pack the Supreme Court with supporters of his policies. These attempts met with violent opposition, even among his adherents, and he was forced to drop his plan.

The Depression did not really end until the onset of World War II, which began with the invasion of Poland by Germany. The world had been heading toward the precipice of war from the time of Hitler's rise to power and the Japanese invasion of Manchuria.

Roosevelt was a strong critic of the policies of Nazi Germany, Fascist Italy and expansionist Japan. However, he pledged to maintain American neutrality. Public opinion, and a series of Congressional neutrality acts, supported this neutrality posture.

With the fall of France, Roosevelt moved the United States into a closer alliance with Great Britain. In September of 1940, Roosevelt announced a plan to provide Great Britain with 50 destroyers in return for the privelege of leasing British bases in the Western Hemisphere.

By March of 1941, Congress had passed a bill allowing the Allies the privilege of borrowing military products in the form of "Lend-Lease." Under this provision, the United States provided the British and the Soviets with over $50 billion in military equipment by the end of the war.

In August of 1941, Roosevelt and Churchill met secretly on a warship off the coast of Canada and signed the Atlantic Charter, calling for the destruction of Nazi Germany. America's slow march toward involvement in the war came to a climax when bombs began to rain over Pearl Harbor on December 7, 1941.

Roosevelt was a strong war leader. He personally became involved with most of the important war decisions, such as the decision to give priority to defeating Germany before Japan. At a meeting in Casablanca in January of 1943, Churchill and Roosevelt decided to accept nothing less than the unconditional surrender of the Axis powers.

Roosevelt took part in two three-way meetings with Churchill and Stalin, one at Teheran and one at Yalta. Roosevelt was very concerned about the post-war international order, and worked to establish the United Nations in order to ensure cooperation and world peace.

Roosevelt died in 1945, while on vacation in Georgia. At his death, the entire country was convulsed in mourning.